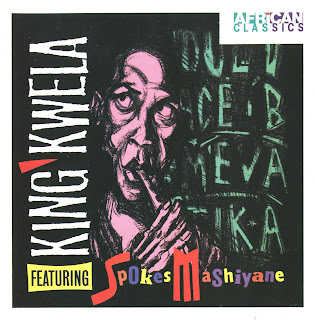 Who knew you could make such joyful sounds on a pennywhistle? Nobody, until Spokes came along. He even developed a whole new way of playing the instrument. This is the classic sound that emanated from the townships in those vibrant early years of S.African jazz. Yeah, I like it a lot (though I'm not so keen on that dark, dour cover)!

Bouncy South African pennywhistle, or kwela, music from the leader of the Solven Whistlers, and frequent early collaborator with Miriam Makeba and the Skylarks. Mashiyane pretty much made the pennywhistle a popular sound, and few people could match him for the expressiveness he brought to such a seemingly limited instrument. For an all-instrumental album highlighting a fairly oddball sound, this disc is far more captivating than one might imagine. Recommended!

from the sleeve notes:

Some good background on Spokes and Kwela music here at the National Geographic...

And there a great post of Spokes' Sweet Sax, Sweet Flute up at electric jive...

comments please... don't leave me whistling in the wind :-)

Thank you very much.
Please, you know that track 14 from:Township Swing Jazz,vol.1 is missing?
Thank you again...

hey MB
glad to hear that, and thanks for letting me know!

@ Kostas from Greece
Try again with the Township Jazz. It worked OK for me just now.
All the best!

Up at the top, I just added a link over to a brilliant post over at electric jive...
Spokes Mashiyane - Sweet Sax, Sweet Flute
highly recommended

Greetings!
I've just discovered your eminent blog and Dl'd David T Walker. Many, many thanks for it.
Now, I tried to do the same with this one.
Didn't work... I can open the DL page at mediafire and klick on the start download, but nothing happens. Any ideas? Or could you re-up it??? Anyway, I will continue to follow this great blog, of yours.
Many thanks.
-bosshoss

welcome and thanks for the comment.
The issue may just be MF playing up — the DL worked fine for me just now. Try again in a little while, perhaps at a different time of day.
TN

awesome work you do!!

thanks for dropping by!

BTW, really nice work on YOUR blog too! great graphics!!

check out old the Spokes 78s that Electric Jive has just posted.
Link at the top, in the main blog!