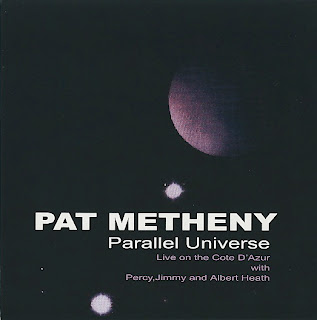 barabara sounds sez:
Judged purely from the line-up, this live album from 1983 sounds like it might be very tasty indeed — Pat Metheny backed by the three Heath brothers, Jimmy, Percy & Albert. Too bad the music doesn't live up to that potential. Track 1, Metheny playing a solo improvisation, is worth the listen. For the rest of it, though, it sound like the band is just going through the motions. Maybe that's because it's a concert date, in Cannes no less (cue pun on canned music). The beautiful bourgeois people of the Cote d'Azure even start clapping along in time on one track FFS. So don't say you haven't been warned.
Nice cover art though!
Posted by taro nombei at 1:20 AM 3 comments:

David Friedman - Of The Wind's Eye 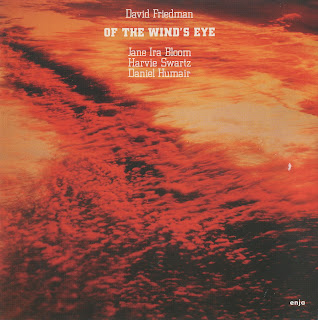 barabara sounds sez:
Another little-known gem from the enja catalog. David Friedman lays down some wonderful marimba and vibes, complemented beautifully by the understated sax work of Jane Ira Bloom and backed up by Harvie Swartz on bass and Daniel Humair on drums. This is finely crafted lyrical music (can you tell I like it?!)
David Friedman is still making plenty of music; here's his home page...
amg (Ron Wynn) sez:
Friedman played with The New York Philharmonic and Metropolitan Operas in the '60s, then worked with Wayne Shorter, Horace Silver, Joe Chambers, Hubert Laws and Horacee Arnold in the '70s. After touring and participating in Ludwig Drum Co. workshops with Dave Samuels, Friedman and Samuels formed The Mallet Duo in 1975 and co-led the quartet Double Image from 1977 to 1980. Friedman recorded with Daniel Humair in 1979 and Chet Baker in 1982. He was an instructor at New York's Manhattan School of Music and Montreux's Institute for Advanced Musical Studies in the mid-'70s.
Posted by taro nombei at 12:24 AM 14 comments: 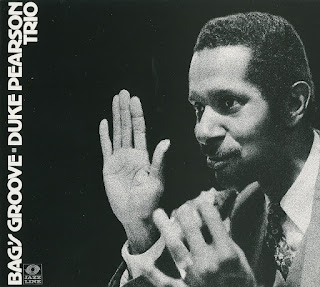 barabara sounds sez:
There were a couple of comments about the sound quality of the last post, but since the imbalance appears to be inherent in the CD (not the rip), I thought the best solution would be to post this...
Essentially it's the same trio session from 1961 as for Angel Eyes, featuring Thomas Howard and Lex Humphries, but without the track Angel Eyes (not sure about why they felt the need to do that). In Japan this was on the Jazz Line imprint, whereas in the US it seems it was on Black Lion. Same difference for me.
Posted by taro nombei at 2:45 PM 16 comments: dusty sez:
A rare pre-Blue Note session from Duke Pearson -- very mellow, very soulful, and with a quality that's unlike most of his later work! The album's a trio side, recorded for the Jazzline label, and it features Pearson on piano, Thomas Howard on bass, and Lex Humphries on drums -- the last of whom brings in some wonderfully lyrical lines on the kit, very much in the manner of the free, dancing rhythms used on records with Donald Byrd. Pearson's piano has a sharper edge than usual -- these dark, moody tones that are totally great -- almost a rougher version of his later sound, with a great sense of depth. Bob Cranshaw's bass and Walter Perkins' drums are featured on one number -- and titles include a killer take on "Jeannine", plus "Say You're Mine", "Le Carrousel", "Bags Groove", and "Exodus". Plus the CD features 3 alternate bonus takes!
barabara sounds sez:
I'm with dusty on that. Top sound quality — it's another high-quality Japanese CD reissue — plus you have to love that album cover.
Track listing: 1. Bags' Groove; 2. Le Carrousel; 3. Angel Eyes; 4. I'm An Old Cow Hand; 5. Jeannine; 6. Say You're Mine; 7. Exodus; 8. Le Carrousel (alternate take); 9. I'm An Old Cow Hand (alternate take); 10. Say You're Mine (alternate take)
Posted by taro nombei at 1:23 AM 19 comments: 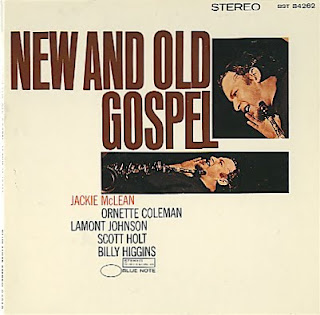 It's been a while since I listened to this, and it sounds just as good as ever to my ears. It's experimental sure — Ornette on trumpet still seems pretty left-field — and a long long way from what McLean was doing on Blue Note just a few years earlier. But it's also a great listen. You've just got to love the way side 2 starts in with Ornette's righteous bluesy Old Gospel (an Amazon reviewer calls it a "pentecostal groover" — can't improve on that). Actually, over in Chateau Barabara, this is a 'must listen'.

Although he could be easy classified as a died in the wool bebopper, saxophonist Jackie McLean loved to shake things up, which he regularly did through a disparate set of Blue Note dates that span the mid 1950s to the late 1960s. New And Old Gospel is considered to be one of his more controversial sets, pairing him with Ornette Coleman here playing trumpet. What might have been intriguing would have been to hear Coleman on alto saxophone alongside McLean, for he plays the trumpet with limited proficiency. Still, there's a sense of urgency that makes this set well worth some close listening. Most interesting are Coleman's two pieces, which originally took up the second side of an LP. Old Gospel comes from a down home and soulful point of view that does indeed mix new and old sensibilities for an intriguing new hybrid, stoked by the chameleon-like drumming of Billy Higgins. Not McLean's best effort in the new vernacular, but still a damn fine listen. 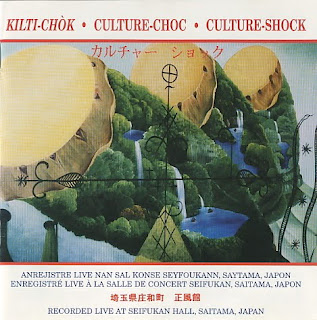 barabara sounds sez:
Haiti has been in our minds a lot since that terrible earthquake. I know so little about the country, the people and the music that this album is just about my only point of reference. It was put together by a group of musicians who were brought over in 1999 to play a series of gigs around the Tokyo area. I caught them in a tiny club in Hiratsuka, southwest of Tokyo, and hung with them a bit after the gig. It was a great show and they were fine folks. This album was recorded live, and it's pretty much the way I heard them.
Like the musicians themselves, the music is an amalgam, fused together from roots, roots rhythms, hints of Cuban and reggae, and jazz. The Haitian musicians — on guitar, bass, conga and tambour — were joined by local pianist Michiko Tatsuno. Some of it doesn't really hang together too well, but other bits work just fine, especially the vodou/voodoo drumming of Bonga (he once toured with Grace Jones) and Sergo.
It's an awful long way — culturally more than geographically — between Japan and Haiti, so the title of this album/aggregation is right on the money. We know all about earthquakes here, but can only guess at the chaos that's going on right now over there. Even if we can't help out directly, here's a simple way to contribute on-line...
Posted by taro nombei at 2:45 AM 3 comments: 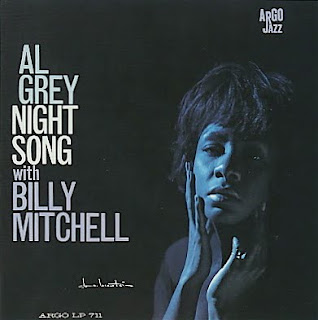 barabara sounds sez:
Actually I don't know a whole lot about trombonist Al Grey, barring what's out there on Wiki, which doesn't even mention this album on Argo from 1963. But this features some excellent early Bobby Hutcherson vibes, so that's good enough for me — plus Billy Mitchell on sax. Check out the great tribute to the man by Nancy Wilson on NPR (below), which includes some very nice sound clips.
NPR (Jazz Profiles) sez:
Trombonist Al Grey was famous as "the last of the big time plungers," for his mastery at using a plumber's plunger to manipulate the color of his instrument. The result was a soulful quality that sounds as if he's singing the blues.
Personnel:
Al Grey (tb), Dave Burns (tp), Billy Mitchell (ts), Bobby Hutcherson (vib), Earl Washington (p), Herman Wright (b), Otis "Candy" Finch (dr), Philip Thomas (dr, cga)
recorded 1962/11/2,5 Chicago
Tracks:
Blues In The Night; Stella By Starlight; The Way You Look Tonight; Through For The Night; Stardust; Night And Day; Laughing Tonight
Posted by taro nombei at 1:27 AM 20 comments: