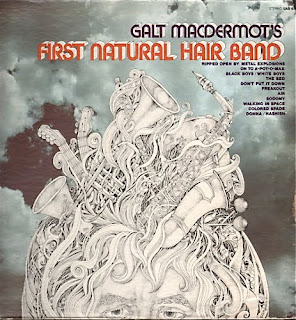 No, not here — this fantastic share is over at the ever-excellent Spiral.
Check it out, and be sure to say hi (and thanks) to Nlgbbbblth while you're there. He's got plenty of other great posts too in his copious archives.
Posted by taro nombei at 12:55 PM No comments: 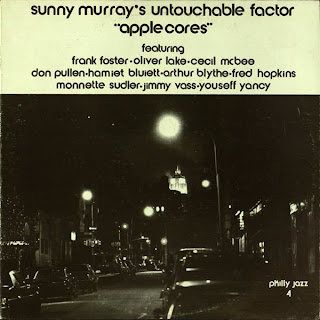 barabara sounds sez:
Spiritual, righteous, rare. What more can you say about this album? Just look at all the people involved... This is ripped from the CD reissue of the Baystate album (though the cover art was lifted from the philly jazz imprint which I found here on Discogs). Enjoy... I think you will!
If this is your bag, then go check out Charred Earth, which Sunny Murray recorded with a very different, smaller version of the 'untouchable factor' aggregation, also for Baystate. It's available over here...
dusty sez:
One of the hippest, tightest sessions ever recorded by drummer Sunny Murray -- a large group set recorded with his Untouchable Factor group -- a great ensemble that includes Frank Foster on soprano sax, Oliver Lake and Arthur Blythe on alto saxes, Hamiet Bluiett on baritone, Don Pullen on piano, and Cecil McBee and Fred Hopkins on bass! The sound is somewhat straighter than Murray's free jazz of a few years before -- almost in the mode that Foster was exploring with some of his large ensembles of the 70s -- a platform for righteous jazz expression, but in a way that's still tied together strongly with a sense of rhythm. Other players on the group include the enigmatic Youseff Yancy on a host of instruments, including theremin -- plus the under-recorded Monette Sudler on guitar. Some tracks are a bit more outside than others -- and titles include "Past Perfect Tense", "One Down & One Up", "Applebluff", "Apple Cores", and "New York Maze".
Sunny Murray: drums; Frank Foster: soprano sax (1, 2, 3); Oliver Lake: alto sax (2); Jimmy Vass: alto sax (1, 3); Don Pullen: piano (1, 2, 3); Monnette Sudler: guitar (1, 2, 3, 4); Cecil McBee: bass (1, 2, 3); Fred Hopkins: bass (4); Hamiet Bluiett: baritone sax (4); Arthur Blythe: alto sax (4); Abdul Zahir Batin: flute, whistles, percussion (5); Youseff Yancy: trumpet, flugelhorn, theremin, various electro-acoustical sound manipulating devices (1, 3, 4, 5); Sonny Brown: drums (5)
Posted by taro nombei at 10:12 PM 27 comments: 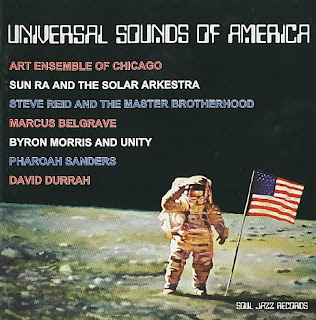 barabara sounds sez:
Sun Ra, Steve Reid, the Tribe sound, Art Ensemble of Chicago... names that need little introduction these days. But for quite a lot of us, this was the album that turned us on to all those wild and beautiful sounds that emerged in the early '70s. Back in the day, this was known as avant guard. I join those who prefer to just call it space jazz.
amg (thom jurek) sez:
Universal Sounds of America is one of the early compilations for Great Britain's Soul Jazz label that made a case for a separate imprint that later became Universal Sound. Artists like Pharoah Sanders, drummer Steve Reid and the Master Brotherhood, Byron Morris & Unity Ensemble, David Durrah, New Life Trio, Marcus Belgrave, and last but not least, the Art Ensemble of Chicago and Sun Ra all on the track listing for this set focus, one way or another, on "space being the place." Numerous cuts here employ the word "space" in their titles and one references it directly… While the focus here is on the diversity of, to borrow a term from the AEC, "Great Black Music Ancient to the Future," it is deeply rooted in '70s out jazz, with only Belgrave and Morris providing deeper, wider visions. Morris' nearly twelve-and-a-half minute "Kitty Bey" replies on modal jazz and Latin rhythms to get his killer track across. Likewise, Sanders uses an electric piano to position himself in space on the gorgeous "Astral Traveling," and Belgrave takes nearly ten with his "Space Odyssey," that reflects on funk, electronic abstraction and Detroit soul-jazz to get his rather elegant point across. The rest is all beautifully played and constructed, but the sheer diversity of the sequencing -- though intentionally constructed in this way -- can be a bit much. Still, there isn't anything here not to recommend.
Posted by taro nombei at 1:34 AM 13 comments: 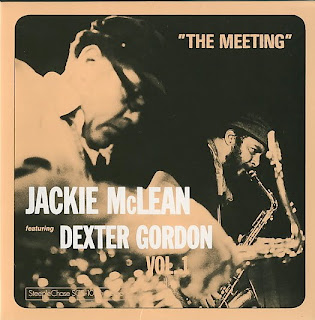 Heavyweight summit meeting of two sax giants, laid down when the two crossed paths in Copenhagen in the sumer of 1973. It's a live session recorded at the Montmartre Jazzhus over a couple of evenings. There was another album (imaginatively called Vol. 2) from these dates, also on Steeplechase. Both of these guys had done their best work earlier in their careers, but this is still a great date.

The first installment of a live recording made in Copenhagen in 1973 -- featuring Jackie leading a group that also includes Dexter Gordon on tenor and Kenny Drew on piano. Niels-Henning Ørsted Pederson plays bass and Alex Riel plays drums -- and the tracks are long and open, with a focus on solo space -- as on Gordon's own European sessions of the time. Song titles include Gordon's "All Clean", Sahib Shihab's "Rue De La Harpe", Drew's "Sunset", and "On The Trail".

Art Ensemble of Chicago — The Complete Live In Japan 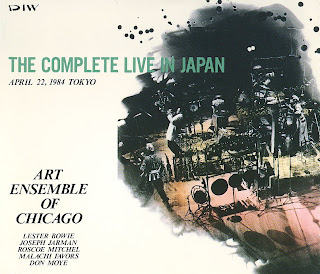 Ancient to the future. That's the AEC maxim — and it sort of fits Japan in a number of ways too. On their second visit, in 1984, AEC played two evenings in Tokyo. Although I may well have been in town at the time (who can remember all those years ago?) I didn't make it to either of the gigs, which is my loss since they've only been over here maybe once since. At least they were recorded for a radio broadcast (I think) and eventually in 1988 this double CD was issued by DIW/Disc Union*. This is the second gig (April 22, Kanihoken Hall, Gotanda) in its entirety — and there are plenty of fine moments here. If you're into AEC, this is essential listening.
[*actually a one-album LP with just 5 tracks was issued in '85]

dusty sez:
2LP set that brings together all of the live material that the Art Ensemble recorded for Japanese DIW in 1984. The concert was recorded in Tokyo, and the set list that includes the tracks "Ohnedaruth", "Spanish Song", "Ancestral Voices", "The Waltz", "Zero", "Odwalla: The Theme", and "Ol Time Southside Street Dance". The playing is fairly spirited, with solos all the way through by Bowie, Jarman, and Mitchell. The record is one of their best from the 80's, and certainly one of the strongest in their catalog for DIW.
Posted by taro nombei at 11:49 PM 13 comments: 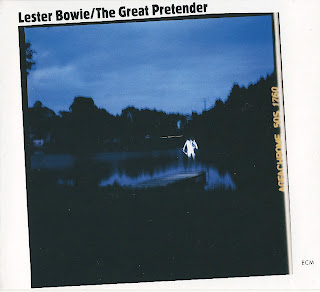 dusty sez:
Lester Bowie's no pretender here -- as he really sounds great as a leader on his own, away from the Art Ensemble Of Chicago -- really finding his voice in music, and dipping into a full range of styles and expressions! Bowie's keen wit and sensitivity both come into play here -- and the album's a bit more open and free than his Brass Fantasy years -- almost hearkening back to elements of his St Louis scene, but with a bit more dynamism overall.

amazon sez:
Bowie stretches the title tune to over 16 minutes with an artful and witty exploration of trumpet sounds, from brassy declarations to low blasts to half-valve techniques that sound like muttered asides. With backup vocals by Fontella Bass and David Peaston and a raucous baritone saxophone interlude by Hamiet Bluiett, the Platters' doo-wop classic becomes suspended between kitsch and concerto. On the rest of the CD, Bowie is backed by a very creative rhythm section of underrated players, Donald Smith on piano and organ, Fred Williams on acoustic and electric basses, and Phillip Wilson on drums. Together they range skillfully from the camp of "It's Howdy Doody Time" to the free jazz of "Doom?" to the Latin funk of "Rios Negroes."