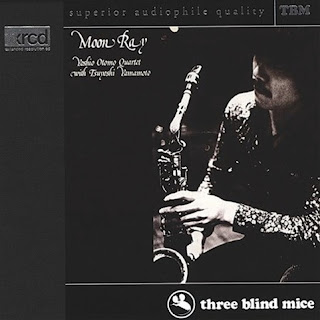 barabara sounds sez:
Back again to the j-jazz archives. This side from Yoshio Otomo is pretty rare, and TJ (below) rates it highly. And yes, maybe it is his "most important work". But I've got to say, it's really not one of my favorites from the TBM catalog. To me it sounds about a decade out of date: Whereas his label mates are pushing the fusion/free envelope, Otomo-san has his feet planted firmly back in the 60s. But that might be a recommendation for some people. Let your own ears be the judge...
AMG (Thom Jurek) sez:
Otomo is an alto player from the Jackie McLean school of tone and the Art Pepper institute for improvisation. In other words, his tone has an edge, but he always phrases and improvises melodically. With Tsuyoshi Yamamoto leading the rhythm section, the other two members, Tamiko Kawabata on bass and Arihide Kurata on drums, had to be ever watchful and vigilant that these proceedings didn't escape them altogether. The set opens with the hard blues wing of the title cut by Artie Shaw. Otomo pushes his alto in the front line toward the lower register, establishing the feeling from the outset before going back up top for his solo. Yamamoto comps forcefully, rhythmically changing the modal interval from inside. It works, and swings as it echoes the blues of jazz yesteryear, though the emotion and sophistication of the players is unquestionable. The other tunes here, Johnny Mandel and Johnny Mercer's "Emily," Oliver Nelson's "Shufflin'," and Ralph Rainger and Leo Robin's "If I Should Lose You" are all played with grace and sensitivity. There isn't any over-teching anything -- a real temptation by Japanese jazzers in the '70s to sound authentic. This is as authentic as anything because the feeling is in the music. That comes through loud and clear on the only original of the set, "Love Comes Quietly," where Archie Shepp's dictum that you can hear every minute of every hour of every day a cat puts into his horn on a ballad: All men are fine soloists, and the melody itself is gorgeous, worthy of the rest of the company it keeps here. A great obscure reissue, and a fine introduction to Japanese jazz.
musicians:
Yoshio Otomo alto sax; Tsuyoshi Tamamoto piano; Tamio Kawabata bass; O "Jess" Kurata drums
tracks:
Moon ray; Emily; If I should lose you; Love comes quietly; Shufflin'
TBM 3007. rec. April 21/22, 1977 at Epicurus, Tokyo
Posted by taro nombei at 8:13 AM 12 comments: 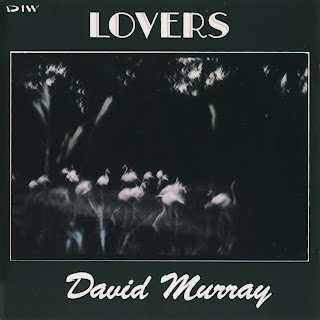 barabara sounds sez:
David Murray laid down not four but five [see comments] albums with the same band in the same series of sessions in New York in January 1988 for the Disk Union (DIW) label. This was the second of them — the others were Deep River, Spirituals, Ballads and Tenors — and probably the most overlooked.
AMG likes Spirituals best — maybe because it's the least 'out there'. It also rates Ballards but doesn't even bother to write up Lovers. There's very little else out there on the web about these albums either, but the review of Ballards pretty much sums this one up too. As the man sez, these were some of his best albums of the decade. Excellent sound quality too.

amg (Stephen Cook) sez:
Ballards is oneof David Murray's finest records. Like the three [sic] other excellent DIW releases that came from the same productive New York Sessions of January 1988 (Spirituals, Deep River, and Lovers), it contains a mix of originals by Murray, pianist Dave Burrell and drummer Ralph Peterson Jr., and it also includes fine bass work by Fred Hopkins. The rapport these players have on this record is stunning. They effortlessly move through a program of cool yet smart after-hours explorations that, in spite of the multi-layered arrangements, come out sounding almost artless... Murray displays his usual inventiveness of phrasing and tone... but thankfully suppresses his penchant for gratuitous outbursts, keeping his solos flowing. This sort of studied, yet loose playing is heard from all the quartet members, including Peterson, who, like Murray, also has the tendency to eat up the scenery... 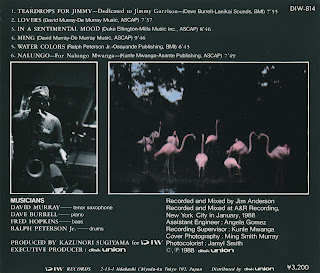 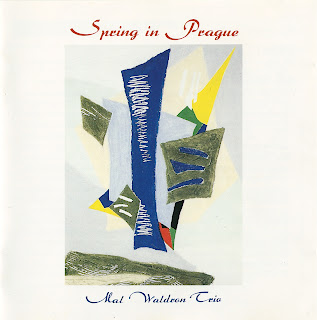 barabara sounds sez:
More Mal – in fact a double-header, both featuring his trio with John Betsch and Paulo Carduso, both recorded in Germany and issued in Japan on the Alfa label.

No More Tears (recorded Nov.'88) is all mellow and introspective, like Mal is still feeling the grief all those years later. Whereas Spring in Prague (Feb.'90) is infused with much more vigor, reflecting the upheaval that had been going on in Eastern Europe in the previous year. Check out 'We demand' and 'Let us live': these are strong statements. In contrast, the title track is softer, an elegy no doubt looking back at the events in Czechoslovakia in 1968.

Apart from the allmusic review of No More Tears, there's very little out there about either of these albums – such as whether No More Tears came out first on Alfa or Timeless – so if anyone has any info, let's hear from you.
allmusic (Steve Loewy) sez:
Not to be confused with the trio session recorded in the early '70s, Blues for Lady Day, this recording takes the same familiar trio format to revisit several tunes associated with Billie Holiday, as well as a few written in her memory by Waldron. The pianist is in a somber mood, perhaps because of the theme, though his performance is up to his usually high standards. A master of understatement, Waldron favors lingering chords that hang laconically even with the faster tempos. He rarely inserts an unneeded note, but instead concentrates on total sound. Drummer John Betsch brings out the best in each tune, pushing Waldron when appropriate. Bassist Paulo Cardoso makes little impression, particularly as a soloist, where he sometimes appears trapped by the structures of the songs. He is more successful as an accompanist. The delightful ambience of the trio results in a laid-back atmosphere that soothes and calms. A fine antidote to a stressful world and a lovely tribute to Lady Day. 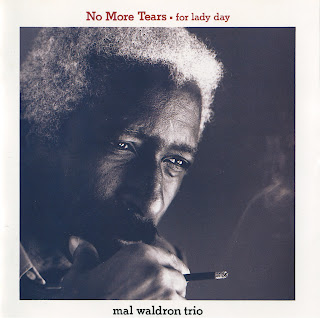