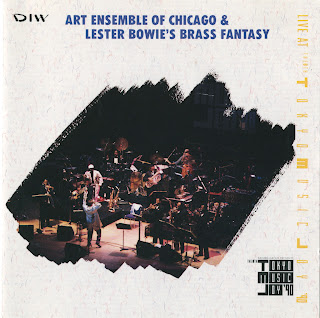 barabara sounds sez:
Back in February of 1990, the Art Ensemble of Chicago came to town to play at the annual Tokyo Music Joy festival – and they shared the stage with Lester Bowie's side project, his Brass Fantasy. This isn't the entire concert so some continuity does get lost, but it certainly gives a great sense of what a fun occasion it was. This is from the Disk Union CD, which gives us three tracks each of the two bands playing separately, and another four tracks of them together creating a rollocking brass-fueled celebration. Great stuff!

the chicago tribune (in 1991) sez:
What a splendid group Lester Bowie's Brass Factory has become. Three recent releases (from the magnificent DIW archives just now becoming available in this country) stake a claim for this ensemble as among the most exciting groups playing today. Bowie’s genius is in marrying edgy post-modern schtick with pure, old-time fun so that the pleasure of listening to themes from the "Phantom of the Opera" or the early rock and roll standard “Great Pretender” (let alone “My Way”) is not wholly in the listener’s head. This music goes right down the spine, which is where feeling begins. For a celebration of what new music can be when it retains its sense of delight, listen to these three discs – especially the one with the Art Ensemble of Chicago, which has never been more wonderful.

an amazon reviewer sez:
The material is wonderful, playful, and varied, with the highest point probably being a truly New-Orleansy workout by the combined bands on "A Jackson in your House," a really goofy song from one of AEC's early BYGs. There are also some free-ish moments, but Brass Fantasy were more about PoMo pastiche and twisted traditionalism than improvisation, so they tend to transform things a bit, bringing Jarman and Mitchell and Favors and Moye "in" from the "outside"... Fans know that one of the most magical things about Lester Bowie's Brass Fantasy was their ability to transform a pop song you'd never be caught dead listening to into something really magical and acceptable as music. On this disk, the unexpected bit of cultural salvage is Andrew Lloyd Webber's "Music of the Night."
It's really wonderful, even if you hate Webber. 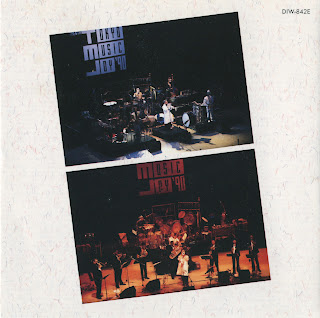 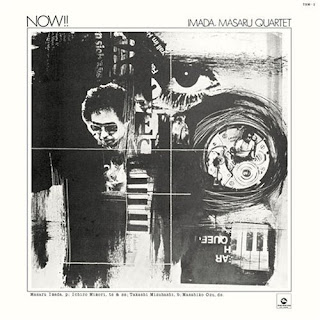 Side 1 gets us under way in languid late-night mood, with Nostalgia, a stately ballad that gives Mimori a chance to open up on tenor. Next up is Alter, which opens with the spotlight on Ozu and Mizuhashi before developing into free exploration with plenty more good work by Mimori. But it's Side 2 that really delivers, two fantastic tracks, the mighty modal Gehi Dorian, which really cuts loose with a righteous groove. To close Imada and his crew dial it back a bit, and go out in lyrical style with The Shadow.
somebody else (can't find an attribution) sez:
Now! by Masaru Imada was the second album released by the fledgling Three Blind Mice label and the pianist's first leader album for the label. All four tunes are Imada's original compositions. The two slow numbers – "Nostalgia" and "The Shadow of the Castle" show his lyrical, "quiet but emotional" qualities. "Alter" is an adventurous tune whose focus is on free improvisation while "Gehi Dorian" is a modal composition as the title suggests.
musicians:
Masaru Imada piano; Ichiro Mimori tenor & soprano sax; Takashi Mizuhashi bass; Masahiko Ozu drums
tracks:
1. Nostalgia; 2. Alter; 3 Gehi Dorian; 4. The Shadow of the Castle
TBM-2; recorded August 10/11, 1970 at Aoi Studio, Tokyo; reissued on SACD 2000
Posted by taro nombei at 7:22 AM 13 comments: