Pharoah Sanders - Journey to the One + Rejoice

The great great Ferrell just finished the second of a two-night stand here. So, in honor and awe, here's a couple of his finest mid-period sides on the Theresa label. Rejoice is of course a bonafide barabara classic – just look and marvel at the outstanding line-up of musicians he has with him here – and without question cause for outright exultation.
As for Journey to the One, it's a bit of a cosmic cocktail of textures – from spiritual-jazz anthems and all-out trademark Pharoa-nics to ballads, and using koto, sitar, synths and more – but there are plenty of special moments here, not least the stately magnificent Bedria that closes out side 4. One of my favorites, in fact...
dusty sez (on Rejoice):
Fantastic 80s work from Pharoah Sanders – with a vibe that's a perfect extension of his classic work for the Impulse label! The album has Pharoah working with an amazing group – Bobby Hutcherson on vibes, John Hicks and Joe Bonner on piano, Art Davis on bass, and either Elvin Jones or Billy Higgins on drums. The sound is remarkably fresh – soaring and spiritual, but also more focused than in earlier years, with a great amount of soulful warmth. And although extra elements are added – like vocals, vibes, and added percussion – Pharoah's solos still dominate the whole album beautifully.
amg (Scott Yanow) sez (on Journey):
…all ten of Pharoah Sanders's performances from the sessions. As usual, Sanders shifts between spiritual peace and violent outbursts in his tenor solos. The backup group changes from track to track but often includes pianist John Hicks, bassist Ray Drummond and drummer Idris Muhammad. Sanders really recalls his former boss John Coltrane on "After the Rain" (taken as a duet with pianist Joe Bonner) and a romantic "Easy to Remember"; other highpoints include "You've Got to Have Freedom" (which has Bobby McFerrin as one of the background singers) and the exotic "Kazuko" on which Sanders is accompanied by koto, harmonium and wind chimes. 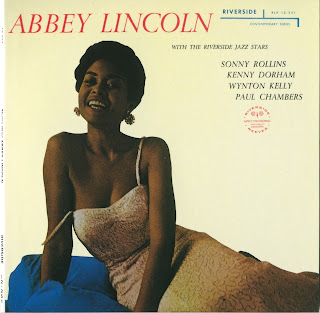 Abbey's work from the 60s and on is probably better known, but this is a lovely early side notable for the stellar cast of musicians backing her, billed here as the Riverside Jazz Stars. I never heard Rollins sound so lyrical! At this point in her career the Billie Holiday comparisons are inevitable — but that's the finest kind of recommendation in my book.
cduniverse sez:
Abbey's first early peak [is] a wonderful and confident set with a stunning ensemble... Lincoln opens with Oscar Brown Jr.'s "Strong Man" — she was one of the performers who regularly recorded his songs prior to his own debut as a recording artist in the early '60s... The gorgeous and dramatic "Tender as a Rose" is presented acapella. Throughout, Lincoln's singing easily mingles jazz, blues and folk influences and phrasings. This strong album pointed the way to her ABBEY IS BLUE, her essential work recorded two years later.
AMG (Scott Yawno) sez:
[On] Abbey Lincoln's second recording and first for Riverside, [she] is accompanied by quite an all-star roster... and, even this early, she was already a major jazz singer with a style of her own. Lincoln was careful from this point on to only interpret lyrics that she believed in. Her repertoire has a few superior standards (including several songs such as "I Must Have That Man!" and "Don't Explain" that are closely associated with Billie Holiday) plus Oscar Brown, Jr.'s "Strong Man" and Phil Moore's "Tender as a Rose"; she takes the latter unaccompanied. "Don't Explain" is slightly unusual in that Paul Chambers is absent and Wynton Kelly makes an extremely rare appearance on bass.
personnel:
Abbey Lincoln vocals; Kenny Dorham trumpet; Sonny Rollins tenor saxophone; Wynton Kelly piano; Max Roach drums. 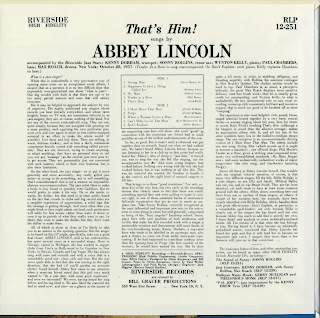 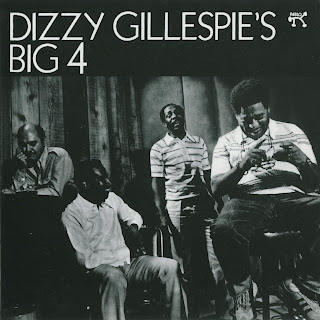 barabara sounds sez:
I don't listen to bebop too much, never have.
It's probably a generation thing – it was already over and passe by the time I discovered it. And
I was probably taking the wrong drugs anyway.   That said, I've always had lots of time for Dizzy, especially the Cuban connection, plus he was such a great showman, though I only caught him in the 70s. Though it was rather past the peak of his prime, he'd no way lost  his amazing chops. Just check out the tempo of some of the tracks on this excellent side from 1974 on Pablo, especially the tour de force that is Bebop (Dizzy's FIngers) which opens side 2. Bravissimo!
And then there was the album he recorded the same year in London with Oscar Peterson, also for Pablo. The pianist got the top billing (it was part of a series of duo sessions with trumpeters he did for the label). But there's no way Dizzy takes second place here. Just the one track this time, but it's a classic: you just can't beat it!
someone else (unattributed) sez [on DG Big 4]:
…superb production values, dynamic acoustic sound, and generally provocative mix of players and musical materials. Dizzy's Big 4 is one of the very best, featuring a dream team rhythm section that responds to all of Gillespie's virtuoso challenges, and then some. Ray Brown is one of the all-time greats, who startled the jazz world when he first emerged as Dizzy's bassist while   still in his teens; drummer Mickey Roker is a commanding percussionist and long-time Gillespie collaborator, while guitarist Joe Pass is a stellar virtuoso, with a series of excellent recitals of his own on Pablo.
Gillespie is in a particularly puckish mood on these sessions. Where the youthful Gillespie might have ordinarily opted for more of the bravura pyrotechnics, represented here by the relentlessly uptempo changes of "Be Bop (Dizzy's Fingers)", Dizzy's Big 4 is distinguished by the ballads "Hurry Home," "Russian Lullaby" and "September Song." Here the trumpeter's rich timbral shadings plumb deep new meaning from these familiar melodies. Most impressive is Dizzy's depth and range as a blues player, which further enlivens his improvisations on Fats Waller's "Jitterbug Waltz," his own latin styled funk on "Frelimo" and the hard bopping "Birks Works."
jazz.com (Mark Longman) sez [on OC&DG]:
On Gillespie's second recording for Norman Granz's Pablo label, he joins Oscar Peterson for a set of miraculous duets. Benny Green, who wrote the liner notes for this album, compared this performance of Ellington's classic composition to the Armstrong and Hines rendition of "Weather Bird." Peterson melds a keen sense for complementary accompaniment with dexterous, interweaving polyphonic lines. The breakneck tempo does little to deter Gillespie, who navigates an unaccompanied section without wavering in the slightest. Both musicians bring their best to this date: both show incredible range, flexibility, and complete mastery of their instruments. The result is a well-worn standard transformed through harmonic freshness and rhythmic vitality into an iconic performance. 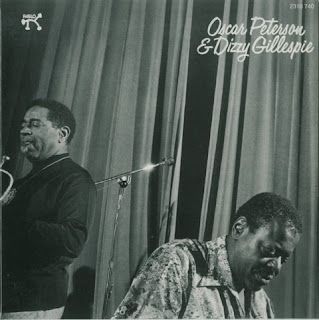