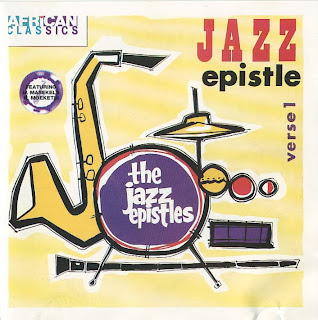 barabara sounds sez:
What a group, what a sound, what a classic! All the way from 1960 and it still has the power to get you up and moving! Dollar Brand (aka Abdullah Ibrahim), Hugh Masekela, Jonas Gwangwa, Johnny Gertze, Makaya Ntshoko and Kippie "Morolong" Moeketsi. Listen and rejoice!
There's a great review of this album and the musicians — with some fantastic photos too — at Hub Pages.
Global Rhythm Magazine sez:

The Jazz Epistles, whose core consisted of Brand, Kippie Moeketsi, Jonas Gwangwa and Masekela, had made the first South African recording by black musicians, Jazz Epistle: Verse 1, in 1959; they won first place at the first Cold Castle Jazz Festival two years later. But when given the chance to support the cast of the popular King Kong musical (in which Makeba was the female lead), they jumped on board to tour England. Curiously, less than 500 copies of Jazz Epistle were originally pressed, despite the group's overwhelming popularity. Subsequent reissues have made up for that.

An essential stone-cold classic. Anything with Kippie Moeketsi is a treasure. Thanks!

Nice one. Is DB/IA the most blogged jazz musician? Always good, mostly great.

Wow, this looks great - thanks!!

Wow ! That smell so good ! Thanks a lot

Wow! I'm such a big Abdullah Ibrahim fan and I didn't know about this one! thanks so much, as I anxiously await the download!Thanks, thanks, thanks!

thanks for all the comments, always appreciate that feedback.

now the next post will all depend on how Japan fares against Cameroon ;-)

@ Kostas from Greece
You're very welcome. Commiserations on the result the other night!

Thank you, but the files don't seem to play... am I doing something wrong ?

Thank, but the files will not play.

No problem for me. Anyone else?

Thanks very much for your efforts, but the problem remains with the re-upped files i.e. they still will not play nor can they be converted.

@ anon
the zip files unpack automatically and there you are with pristine mp3s.
if that's not happening for you, then try some other extraction software. And if it's still not happening, never mind. There are plenty more posts coming down the tube very shortly.

Thanks again taro nombei.
Have tried with winzip, winrar & 7-zip, all to no avail.
However all the files are m4a, not mp3's, so even after I've tried changing the extension after your above post, its stil the same and according to the metadata the files are 0 Kb.

Still, many thanks for your efforts

There's plenty of other extraction software. I use VLC when I face this issue in reverse. Keep seeking and you may find...

I use VLC but if it still won't open I use total recorder to convert it.Thanks for the album it looks a goodie.

Thank you very much taro nombei! After the first link I thought I could only smell it, but with the second I can taste it. Great post, a piece of history!

How great to be able to hear this classic!
Many thanks for this beautiful share.

Thanks! Great post and a great blog but it says file is private and does not let me access it.

@ anon
the file was reupped. check out the comment about 8 or 9 above this one!

Hi Taro Nombei,
I am the original Anon from a few posts above who could not get the files to play and now see that I am not the only one to have trouble with them.Does anybody else have comments who have been able hear them play. (total recorder is not freeware, by the way)

Dear Taro Nombei,
I have found the answer (the clue being in your latest post)...I did not have an M4a lossless codec installed. Did so, & now all is well... hope this helps others.
Finally, many, Many Thanks for this wonderful post & for putting up with my ignorance.
Great Music !!

Absolute classic. I bought it in Jo'Burg Airport some ten years ago - and a few others incl. Jazz Offerings and the King Kong soundtrack. There is/was a recordshop in the airport with an excellent selection of SA Jazz. I hasd time to kill and the young vendor was very enthusiastic. Must have bought close to a dozen CD there. Unfortunately I haven't been in that part of the world for a while so I can't tell you if the shop is still there. I have a few rips on my harddrive, I'll see if I can post'em. Cheers

@ boogieman
I totally agree.
Most of these albums are OOP (afaik). These rips are from the CD reissues on Celuloid. No idea if they're still out there in S.Africa.
I've got a couple more to post in this series — they'd have been up there already if my computer hadn't died last week. But if you have any more, do let me know.
cheers

Thanks for this classic which I didn't know (yeah, it's embarrassing) and good luck to your team - I keep my fingers crossed for Japan!

cheers brother...
and thanks for the fingers crossed... in the end though it ended :'-(

been looking for The Epistle for so long. very grateful to find this. thx for sharing.

Try reading through the thread of comments above.

This stuff is eye-popping. Thank you.

@ Rhythm Changes
thanks for dropping by — glad you're digging down into the vaults here :-)

Thank you very much!

I tried to download this intriguing offering and got a message that the download is set to private. Is this download available? If I ask real nicely?? Please and Thank you.

@ Eric
seek and you will find...
clue: the 14th comment down
(and sorry I didn't take down the initial link)

your epistles (and even comments) gratefully accepted...

@ Peter
Maybe they saw themselves as the message, not the messengers.
cheers!

Could you repost this, please - the Mediafire link is dead. Would be appreciated - but thank you, whether you can or not.

OK I'll need to dig this (and the other one) up from the vaults.
Hopefully it won't take me too long.
Keep checking back...

Can anyone please re-up this one?