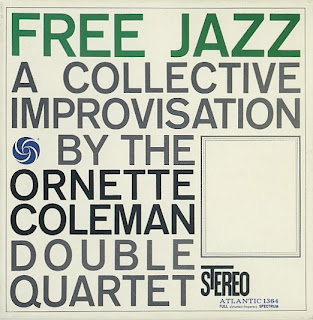 barabara sounds sez:
One of those albums that have iconic status but few people have actually listened to much. Ornette from 1961 in full flight, with a double crew of kindred spirits on board, including Eric Dolphy, Don Cherry and Freddie Hubbard. Obviously this is not easy listening music. But nor is it 'diffficult'. It demands your attention — and rewards you for it. No hesitation here: it's a classic.
Dusty sez:
The title gets it right — as the album's easily the closest thing to free jazz that Ornette Coleman ever recorded — an album-length improvisation played by a "double quartet" that's overflowing with classic players! The style here is a fair bit like John Coltrane's Ascension album for Impulse — and like that one, the session features Ornette and his contemporaries really stretching out — blowing like never heard before on record, and working in a highly unstructured setting! Other players include Eric Dolphy on bass clarinet, Freddie Hubbard on trumpet, and Scott LaFaro on bass -- alongside regular group members Don Cherry on pocket trumpet, Charlie Haden on bass, and both Ed Blackwell and Billy Higgins on drums. One long track -- just titled "Free Jazz"!
Wiki sez:
The original release embodied a painting by Jackson Pollock on the front of the cover, and its title gave the name for the whole free jazz movement. It involves two separate quartets, one to each stereo channel; the rhythm sections play simultaneously, and though there is a succession of solos as is usual in jazz, they are peppered with freeform commentaries by the other horns that often turn into full-scale collective improvisation. The pre-composed material is a series of brief, dissonant fanfares for the horns which serve as interludes between solos. Not least among the album's achievements was that it was the first LP-length improvisation, nearly forty minutes in length, which was unheard of at the time.
Track listing
1. "Free Jazz" (37:10); 2. "First Take" (17:02)
Personnel
Left channel: Ornette Coleman alto sax; Don Cherry pocket trumpet; Scott LaFaro bass; Billy Higgins drums
Right channel: Eric Dolphy bass clarinet; Freddie Hubbard trumpet; Charlie Haden bass; Ed Blackwell drums
And this is the Jackson Pollock painting that apparently inspired it all: 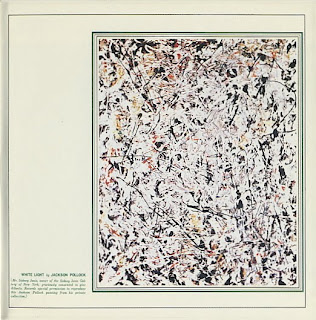 Shirley Clarke's Ornette: Made in America

Thanks for that link. I wasn't aware of that movie at all.
Intriguing trailer...

TN!, Ornette´s style is awasome!... thanks to you and thanks to groove68 for the movie link.