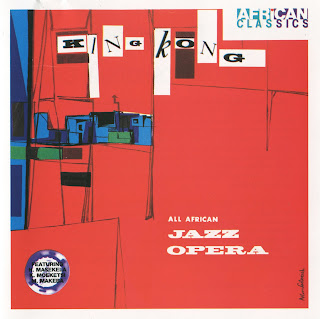 barabara sounds sez:
The last of this series of S.African posts: the seminal jazz opera that launched the international careers – and extended exiles – of both Miriam Makeba and Hugh Masekela. This is the recording of the 1959 original cast (there was also an album from the London cast), from the CD reissue on Celluloid. It's more of an artifact than a must-listen but there are some fine tracks. And the first – Sad times, bad times – is a classic. It's also wonderful to hear Mama Africa in one of her earliest recordings... Essential!!
wiki sez:
King Kong had an all-black cast. The musical portrayed the life and times of a heavyweight boxer, Ezekiel Dlamini, known as "King Kong". Born in 1921, after a meteoric boxing rise, his life degenerated into drunkenness and gang violence. He knifed his girlfriend, asked for the death sentence during his trial and instead was sentenced to 14 years hard labour. He was found drowned in 1957 and it was believed his death was a suicide. He was 36. This musical was a hit in South Africa in 1959 and played at the Princes Theatre in the West End of London in 1961.
soul safari has a great post with lots more background here...
track list:
Sad times, bad times; Marvellous muscles; King kong; Kwela long; Back of the moon; Petal’s song; Damn him; Strange; Better than new; Mad; Quickly in love; In the queue; It’s a wedding; Death song
band
Joseph Rubushe, Hugh Masekela, Simon Chose (tp); Gwangwa Jonas (aka Jonas Gwangwa), Dougmore Slinga (tb); Mackay Devashe (ts, orchestration, arr, leader); Sylvester Phahlane (ts); Christopher Coka (bass s); Gwigwi Mrwebi (cl); Kiepie Moeketsi (aka Kippie Moeketsi) (as, orchestration, arr); Sol Klaaste (p, orchestration, arr); General Duze (g); Jacob Lepere (b); Ben Maoela (d); Stanley Glasser (musical d, orchestration, arr); Arnold Dover (choreography); Harry Bloom (book).
Posted by taro nombei at 3:42 PM

glad someone's noticed this...
everybody's too busy watching the football, I guess...

Hello Taro Nombei,
it's disappointing that more people have not noticed this beautiful - and historical - album (or didn't bother to comment). The voice of Miriam Makeba is absolute delight. I wrote earlier that I had a few SA Jazz albums (including vinyls but I can't rip them right now)purchased in SA in the 90s and early 00s.
Here is a rip of an album by the Jazz Ministers. Zandile is the better known track, it appeared on many compilations but the rest is pretty good too. Please feel free to transfer and post on your site, I would be honoured.
Filename
Download link
The Jazz Ministers.rar (59.18 MB) http://www.multiupload.com/SGBCJAA1FF

Hey boogieman
yes, the response has been underwhelming, though comments are as rare as hen's eggs these days on most blogs.

Thanks so much for the Jazz Ministers rip — I had something else planned for my next post, but I'm delighted to carry on with the S.African theme. Right away... This is a great share, and I hope others think so too!

Do you have any more info on the music itself: year, musicians, etc.?
There:s very little to find on line.

Hi Taro Nombei,
glad you liked it, I'm not sure it has been posted anywhere else as I hadn't encountered it yet on the blogsphere.. The only info I have is what's on the sleeve, i.e. close to nothing apart from the titles and a date which is most likely the date of the CD reissue, not the original LP date (or is it, Who knows?).If anybody has any info on the musicians, I'd be most interested.
Cheers

And I just realized:
In my last comment I meant to say "rare as hen's teeth" not "hen's eggs" if course.
In case anyone was wondering...

And now a couple of comments have disappeared in the ether, which means my comment about hens teeth is even less comprehensible.
Ah well...

A thousand thanks for these posts on the music of South Africa.
I managed to download all but it does not.
Could you upload it again?

BSounds ... Thanks for this album ...
Baron VB
especially interested in the title track .. . it would seem this song became popular w Traditional Jazz in UK.

ok.
I did not understand why ...
but now it works.
sorry and thanks

UK trad jazz... well, that's something else.
Terry Lightfoot took that track up, I believe (if Google is not mistaken). Not really essential listening at Chateau Barabara ;-)
Thanks for dropping by!!

Glad it's all sorted now.

Taro M ... I agree about the Lightfoot track (however in that band is the now world-renown trombonist Roy Williams). A better version is by Chris Barber - taken slowly. Available in Barber's Best Yet lp.
Baron VB

@ Baron VB (sorry I got your name dyslexic last time :-(

Well, I'll take your word for it. There's too little time, too little hard disk space and too many other fantastic sounds to go chasing that down. (you can tell that UK trad is not my cup of cha)
But if it ever does come my way, I will keep my ears and mind open to it... :-)

all the best from over here!

your site adds the extra bounce to the ounce.

Thanks for including Soul Safari in your post on the King Kong original Jazz Opera. I have linked your site, a link from your side is very much appreciated.

Thanks for dropping by — you are now officially up on the 'Barabara Sounds digs' list!

Finally someone came up with this classic, BIG thanks!

With so many great SA artists involved i always wanted to hear this.
Thought i've read somewhere that Letta Mbulu was also part of the cast, but i can neither find her name here nor at Soul Safari post. Am i mistaken?

Letta Mbulu wan't in the original cast but she was in the cast that toured the US. Which is why she came to stay there. I believe.
More here: http://www.dougpayne.com/lmbio.htm

King Kong is a lovely record, I first heard it in 1959 when Father Trevor Huddleston visited our school in the UK raising money to buy instruments for the Big Band he ran in Sofiatown from which this show grew. We spent months practicing our rythm guitars to these tracks. I also saw the west end show too. Over the years I have regularly returned to this album to freshen my ears. Just listen to the arrangements! Magical! Not bad for an elderly english white guy eh!

Many thanks for dropping by — and the background info.
I'd never heard that Father Trevor went round fundraising in the UK...

"Not bad for an elderly english white guy eh"
Do you mean yourself? or Huddlestone?
;-)

Found a mono version of the London cast recording in a charity shop this weekend in near mint condition. I had never heard of it but took a chance because of the cover and Jack Hylton's name. Instant love!
That led me here to the original recording. So thanks for posting.

A beautiful record and the pre-curser of so much we now know and love in the west.

Please would you re-up this? Been looking for it for ages! Many thanks.

I too would love to see this re-upped. Only seems available in expensive second hand LP's. Thanks, GREAT blog, I just discovered you

Finally tracked it down.
Here you go…

THANK YOU SO MUCH!! Warning to all: please do not order this from One World African Cyber Music store. After paying by credit card, I was told it was not in stock and could not be gotten, and required to order a replacement!